the comforting spice that makes everything nice 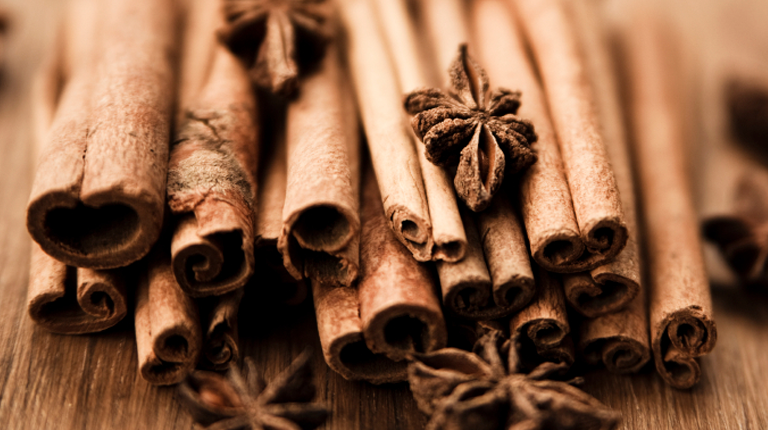 “Some foods are so comforting, so nourishing of body and soul, that to eat them is to be home again after a long journey. To eat such a meal is to remember that, though the world is full of knives and storms, the body is built for kindness. The angels, who know no hunger, have never been as satisfied.”

Take a moment to consider the word.

Go ahead, close your eyes.

When you think of comfort, what food comes to mind?

It’s odd to me that the phrase ‘comfort food’ is now associated with the sticky, sickly sweet, gooey or cheesy. All things that defy comfort to me (and my body).

When I close my eyes and think of the foods that connote comfort, they’re the foods I grew up with, the foods that were familiar in my childhood—foods like stuffed cabbage, chicken soup, mandelbrot (the Yiddish name for a biscotti-like delight), and cinnamon toast.

Did any of your comfort foods have a hint of cinnamon?

Nearly all of mine did.

As we move into the holidays, let’s uncover the culinary and medicinal uses of this colorful spice. Honestly, it’s a perfect time to think about comfort in relation to the beneficial sprinkles that adorn and flavor our holiday foods!.

And even if you no longer eat the dishes you associate with comfort, please don’t let that stop you from “returning home” this holiday season. The spices of your all-time favorites may just help conjure up all the nourishing comfort you’re seeking.

Get creative and spice it up!

Whether you’re a seasoned spice user or rarely venture beyond basic salt and pepper, there’s so much to explore in the world of spice. (They really do make everything nice!)

One of my favorite ways to include spices and other superfoods are in warming elixirs. If you’re wondering what an elixir is, it’s a cozy, magical, and medicinal (non alcoholic!) drink.Whether they’re part of my morning ritual, an afternoon pick-me-up, or a sleepy-time treat, elixirs are always a hit in my house and I aim to share my cinnamon-infused secrets with you and add a little zest to your day (in the form of a fragrant and warming cuppa).

Cinnamon is likely not new to you.

In fact, if you have one spice in your spice rack (besides salt and pepper), it’s likely cinnamon!Even if this spice easily makes its way off the rack into your food, you might not know that it goes well beyond just making baked goods more tasty and toast a pure delicacy. This super-powered spice actually helps to balance your blood sugar, reduce inflammation and help fight infections. (Give me a sprinkle now please!)

We can find mentions of cinnamon being used as food and medicine in the Bible and ancient Egypt. It’s rumored to be more precious than gold in ancient times and was often a gift for the kings!

This now common spice comes from the reddish-brown inner bark of the cinnamon tree called Cinnamomum. The bark is dried and rolled into a tube called a quill (or stick) and then ground into powder for the form that’s most common on grocery store shelves.

The scent and flavor that’s so specific to cinnamon (and might have your family coming to the kitchen when you’re baking cinnamon-spiced treats), comes from the plant oils that are rich in the compound cinnamaldehyde.

Those compounds not only tickle your tastebuds but are also behind cinnamon’s powerful effects on your health and metabolism.

Perhaps ironically, this spice that’s such a common addition to sweet desserts can also help balance your blood sugar, reduce insulin resistance and decrease the risk of developing metabolic syndrome and type 2 diabetes.

One study on cinnamon (among many!), showed that adding 1 gram of cinnamon to your diet per day for three months helped reduce Hemoglobin A1C levels. (That’s the long term measure of blood sugar that’s considered in the diagnosis of diabetes.) Be sure to note the comments at the bottom of this post before trying this at home.

It’s thought that cinnamon mimics the action of insulin and may stimulate the insulin receptors on fat and muscle cells the same way insulin does, allowing excess sugar to move out of the blood and into the cells.

Cinnamon is rich in antioxidants that help reduce inflammation in the body making a cinnamon-spiced smoothie super for sipping after a hard workout or long day.

This super spice comes to the rescue to help decrease the risk of heart disease by reducing levels of LDL cholesterol and triglycerides and also lower blood pressure.

In addition to a happy heart, cinnamon can also boost brain health. Two compounds found in cinnamon appear to inhibit the buildup of the protein that is a hallmark of Alzheimer’s disease.

And cinnamaldehyde, the active compound in cinnamon, can fight bacteria like Listeria and Salmonella and helps treat fungal infections like Candida. It’s anti-microbrial effects can even help keep your pearly whites free from decay and your breath smelling fresh.

Ready to sign up for more cinnamon? I sure am!

You can use cinnamon throughout the year but it’s sweet and spicy taste and warming nature is especially nice to chase the chill during these colder months.

Try this elixir that pairs a winter favorite (apples!) with cinnamon and other superfoods. Make yourself a mug, curl up in a cozy blanket by the fire, and keep warm from the inside out.

2 cinnamon sticks (plus two for garnish)

liquid stevia (around 5 drops) or raw honey to taste

If you do plan to experiment a bit more with cinnamon (which I hope you do), put it on your to-list to treat yourself to a new jar, especially if your cinnamon has been hidden in your pantry and gathering dust for more than a year. Most dried spices are best if you enjoy them within six months and cinnamon is the same. It should smell slightly sweet when you open the container.

Your nose will know if it’s fresh and everyone in your house will come running when you heat it in a sweet or savory dish.

Cinnamon pairs nicely with a number of other spices! Consider allspice, cardamom, chili, cloves, coriander, cumin, ginger, nutmeg, anise and turmeric. Where you use these, throw in a dash of cinnamon too!

What’s in a name?

You might have seen cinnamon with exotic sounding names and wondered which to choose. There are generally two main types of culinary cinnamon available, Ceylon cinnamon and the more common Cassia cinnamon.

Cassia is what you’ll likely find on the supermarket shelf and it may be any of the following species of cinnamon:

These cassia varieties all contain larger amounts of a compound called coumarin, which may be harmful in larger doses. It’s likely fine in the amount used in home cooking but worth noting! (Please do not go on any cinnamon diets to try to manage your blood sugar without support of a qualified practitioner.)

A better option for taste and health is Ceylon cinnamon (also called Sri Lanka cinnamon or “true cinnamon”). Studies show that this form is much lower in coumarin than the Cassia variety. And Ceylon has a sweeter, more refined taste than its Cassia cousins, making it worth the extra investment. You may need to seek out a local spice store, ethnic market, or order online to gather up this Ceylon cinnamon gem.

Be Aware and Act Flax

On Our Minds: At-Home Allergy Testing

As we see more and more people experiencing unresolved signs and symptoms, it becomes easy to understand the allure of at-home testing, and the promise that testing will not only reveal a root cause of suffering, but provide a quick-fix solution. The conversation surrounding the use of at-home allergy testing for food sensitivities continues to […]

Jacqui Bryan is a Registered Nurse (RN) with extensive training in western medicine and over ten years of practice under her belt. When she was diagnosed with an aggressive form of breast cancer, she experienced the GAPs that exist in our healthcare system. She journeyed to learn more about nutrition and a holistic approach to […]

Be Aware and Act Flax!

While October is Breast Cancer Awareness month, that does not mean that our awareness and action should be relegated to one month out of the year. This is especially true because several types of cancer, as well as low thyroid function, and a host of other signs and symptoms, have one big thing in common that deserves our attention…

Kate Smith is a military wife and mother who also served as a United States Air Force intelligence analyst and educator. She began her studies with Functional Nutrition Alliance as a mom and former Air Force officer who had no prior health or medical training, but she sure had passion! Now Kate is thriving as […]