studies of dietary patterns from around the globe have established that populations that consume more spices have the lowest incidence of chronic diseases such as heart disease, cancer, diabetes, and Alzheimer’s

Last week I sat down for tea with a friend traveling the states on her honeymoon. She was visiting from Israel.
Inbal (that’s my friend), and I originally met on a food tour in Tel Aviv. She was the tour guide! And that day unfolded in delicious and unexpected ways.
There was food, yes, but also history, culture, people and stories like you would not believe. The market (or “shouk” as it’s called), was crowded with towers of spices and what tickled my interest the most were the spice blends.
Those too came with stories – stories of where they came from and how they were originally used.
When Inbal and I sat down last week in PDX (fast friends after a one-day food tour almost two years ago!), she produced a little bag of specialty spice blends, relaying the name of the mixtures and recommendations for their use.
One thing I love about the spice blends is that they function like fast food – making everything more tasty (and healthy) in one quick scoop – from soup to rice and roast to toast.

And this spicy reunion inspired me to get spicy with you!

Let’s spend the next month (or so, this could be fun and we might not want to stop), exploring a variety of spices and their culinary and medicinal uses.
Spices, you know, are ripe with antioxidants and myriad healing chemical compounds. Scientific research has identified that spices – even more than herbs, fruits, and vegetables – contain potent nutrients for health. And studies of dietary patterns from around the globe have established that populations that consume more spices have the lowest incidence of chronic diseases such as cancer, heart disease, diabetes, and Alzheimer’s.
One of the mixtures Inbal produced out of her bag during our tea date is called Hawaij. It’s a spice blend that originated in Yemen and it’s super yummy. It includes ginger, cinnamon, cloves and cardamom, and sometimes a bit of nutmeg.

what’s in my spice cupboard today? 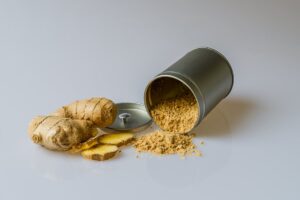 Ginger has been considered a culinary medicinal for thousands of years and it’s played an important role in traditional Chinese and Indian healing modalities. It’s used cross-culturally to abate inflammation and pain, especially in the digestive tract.
You’re likely aware of the use of ginger for quelling nausea and a queasy stomach.
Clinical studies have actually shown it to be more effective than several over-the-counter anti-nausea medications.
While ginger is touted for its use in addressing several inflammatory conditions, from asthma to influenza to fibrocystic breasts, today my focus is on inflammation in the digestive system, which will affect every other system in the body. Digestive inflammation may appear in the form of gas, bloating, constipation, diarrhea, heartburn or reflux.
Ginger helps to fight this inflammation, cleanse the colon and reduce spasms and cramps. It assists in remedying sores and wounds, which can appear on the inner skin of your digestive tract, as well as your outer skin.
There have been several studies measuring the inflammatory markers of mice with IBD. One study showed the ginger lowered those inflammatory compounds up to 73%!
And for those with kidney stones or who take anti-coagulants, please tread more lightly with the ginger, keeping it to your culinary purposes only.

The Wonders of Ginger

My late husband, perhaps because he was half Asian, had an affinity for ginger.
When he had a cold, I’d find him sipping concoctions of fresh grated ginger, lemon juice, honey, and cayenne pepper in hot water.
When one of us got a burn in the kitchen, he’d quickly slice some ginger and slab the exposed center of the root on the throbbing skin.
He could eat crystallized ginger by the handfuls; it was a treat I would buy him for his late nights at work. And little did either of us expect that our son would arrive with hair that in many cultures (including Israel) is called ginger!
Ginger has been savored and revered for centuries as a culinary and medicinal gem.
It’s used to expel cold, induce sweating, and therefore help release toxins from the body. It’s great for digestion, coughs, and nausea–even during pregnancy.
In food it stimulates the salivary glands and taste buds. And it is indeed a potent anti-inflammatory, even helping with arthritic pain.

Almost everyone I know loves a good cup of chai. The truth is your chai loves you too. 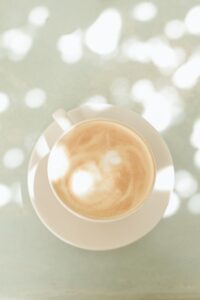 Not only is the warm cup of herbs and spices the perfect antidote to a busy and blustery day, but those typical chai ingredients are also loaded with effective seasonal healing powers.
Cinnamon.
Ginger.
Cardamom.
Nutmeg.
And I like to throw in a bit of turmeric for its great anti-inflammatory potential.
Sure, you can think of your chai as a blood sugar regulating, immune boosting, brain focusing, gastro-intestinal supporting, anti-inflammatory tonic. But I’d rather think of it as a treat with benefits.
I adore this chai latte with a ginger boost. It’s perfect for an afternoon treat on a cool autumn day.
Ingredients
for the base

To make the base
Place the tea bag and sliced ginger into a teacup and add the 2 cups of hot water.
Allow to steep for 10-15 minutes. Remove the tea bag (but keep the ginger).
To make the elixir
Simmer 1 cup coconut milk with all the spices (cinnamon through salt; use the whole spices or powder, whatever you have on hand) for 5-10 minutes.
Remove cinnamon sticks, cardamom pods and star anise if using.
Combine your tea base (with your ginger in it) and your spicy coconut milk in a blender and blend until smooth and frothy. It will be a lovely yellow form the turmeric and ginger!
Add stevia or honey to taste and sprinkle with cinnamon and/or turmeric if desired.
This makes 2 servings so pour a mug for you and a friend and enjoy!
The next time you’re at the market, be sure to grab a gnarly nob of ginger and begin to bring it in to your daily routine. Your belly and tastebuds will thank you! (And you may just have a spicy reunion of your own.)
Warmly,

P.S: Keep reading for more ways to use ginger to cure common aches, pains and ailments.

For muscle strains: Mix powdered ginger and turmeric with water to make a paste; apply to injured area twice a day. (note: turmeric may temporarily stain the skin)
For a sore throat: Bring some water to a boil, add about 1/2-inch knob of ginger per cup of water. You can then add lemon, honey, and cinnamon or cayenne pepper to taste. Drink throughout the day.

Stimulate blood and body fluid circulation: Place about a handful of coarsely grated ginger into a cheese cloth or a nut bag. Squeeze the juice from the ginger into a pot containing hot but not boiled water. Gently dip a towel into the ginger water and wring it out. Apply to the affected area. Great for cold hands & feet!
To relieve nausea: Ginger tea can be consumed or ginger pills can be taken in doses of 200mg every 4 hours.