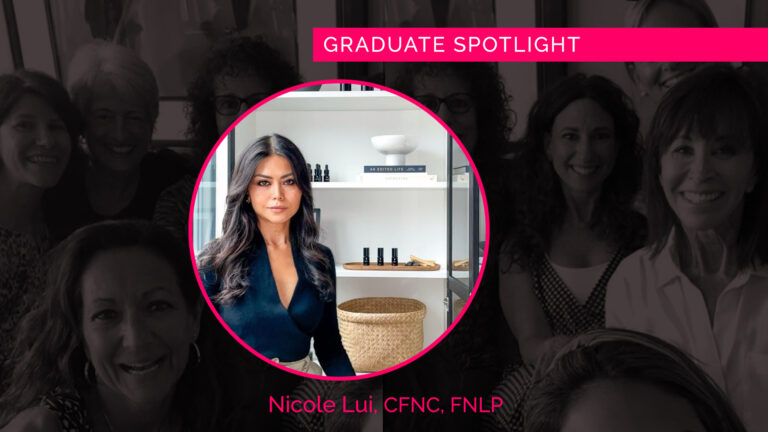 Full Body Systems graduate, Nicole Lui, FNLP, CFNC, is also known as The Perfectly Imperfect NeuroDivergent. She is an entrepreneur, practitioner, mother of a spectrum household, and neurodiverse advocate.

Prior to joining Full Body Systems, Nicole didn’t feel like she had the skills, intuition, or alignment with her ability to care for others. Nicole was born in Hong Kong during its golden era. She was raised in a multiethnic family, later spending her early teens and adulthood in Australia.

Nicole: I was born with multiple gut issues that the conventional medicine realm couldn’t identify, especially in the 80s and 90s. As a result, I often suffered from constipation and bloating and could not have natural bowel movements.

In addition to bowel issues, I was considered an overweight kid, especially through the Eastern Asian lens. Although Hong Kong was seen as a progressive city back in the day, I was constantly verbally abused. Because I am part Chinese, part Native Indonesian, Malaysian, and some Southeast Asian, the abuse came from all sides of my family and society for not fitting in their traditional molds.

By the young age of 11, I had lost my beloved uncle and had been sexually molested by a relative. Unfortunately, my parents weren’t willing to hear me at the time because my mother was dealing with her own suicidal depression. I had to learn how to be independent and hold my emotions deep within my core because I had to care for my younger brother.

Since those events, I have planned out my life and followed through with each step. I had a difficult time in school because reading was a significant challenge. Eventually, I was able to do well enough to pass by translating the words into mind maps and pattern-based systems. I came to find out my learning setups were naturally different from others when my IQ test at school returned with high scores. It caught my teacher’s attention, and she asked me the same question as everyone else did: why are you so intelligent but so stupid?

By the age of 14 I found out I was having thyroid issues and developed an eating disorder while also experiencing hair loss (I had to go through multiple injections in my skull once a month).

I entered college at 17. Those college years were new and exciting, yet my gut issues got worse. One year before graduation, I fainted. I wasn’t doing well physically or emotionally. Come to find out, I had a thyroid tumor growing which forced me to drop out of college to receive a thyroidectomy. After the surgery, I went backpacking to explore different cultures and medicines in Southeast Asia, Central and Northern Europe, and North America. Then I got married and moved back to Hong Kong.

Can you tell me about your family’s challenge with ADHD and Autism?

Nicole: My husband received his ADHD diagnosis with High Intellectual Potential (HIP), and it was during this time we started to self educate about the diagnosis.

As our children grew, they started to show symptoms of ADHD and Autism, receiving formal diagnoses of Autism, ADHD, and HIP after our move to Canada. During this time, our former nanny passed away. She had taught me how to love with pure love, how to forgive with knowing what forgiveness was really about. It was a loss that we all felt very deeply.

These multiple hits drained my emotional energy. During my recovery, I took time to think and rewind all things that happened in my life. I considered my gut issues, weight problems, the way I learned, viewed, and understood things, and the loss of my uncle due to Alzheimer’s and brain strokes. I also considered how other people dealt with grief, my mom’s mental battles, my kids’ health issues, and our beloved nanny’s passing before I could turn my promise to her into reality.

I’ve come to realize that perhaps they were all interconnected!

How did you find Full Body Systems?

Nicole: I started to pull out old books and notes in all the languages I know to tap into memories of my own qigong and tai chi as well as traditional Chinese medical practices with the Chinese side of the family; mixing spices and herbs with the community of my Indonesian family; understanding biological and chemical makeup from post-victorian/conventional science; and what I’ve experienced in different cultures and worldviews. I started to build a map to line them together, and that’s when Full Body Systems came to me. I knew it was the key to helping open new doors for me.

Do you have a niche that you serve?

Nicole: I started a company called Noirstone, a lifestyle sanctuary dedicated to urban neurodivergents by neurodivergents. Our goal is to help neurodivergents, educators, and practitioners expand and see “Beyond the Medicine Cabinet” by minimizing misinformation and gaining the knowledge and views on supporting neurodivergents with current availability and accessibility, attainability, sustainability, and embodiments.

Today’s society emphasizes diets, yet the majority of them are unsustainable. However, through my training with Full Body Systems, I learned “we aren’t what we eat but what our bodies can do with what we eat.”

Food has been the vitality and a modulator in my culture and heritage. It’s very bio-individual and seasonal based, depending on the person’s constitution, monthly cycle, and external climate. This aligns so well with the principles of Full Body Systems.

The program helped me reframe and gain knowledge to develop a new system that merges these different views, cultures, perspectives, and medical models together to create a fundamental framework that serves neurodiverse families.

What has been a struggle in serving your clients?

Nicole: To me, the biggest challenge isn’t about serving the clients themselves. They feel relieved and gain hope after initial conversations. The true challenge is to redirect practitioners, lawmakers, and educators from what they’ve known into something new.

The old stigmatized mindset usually involves a practitioner jumping right in and offering a solution, whereas the “new” mindsets tell neurodivergents that the diagnosis is just a simple label and to explore diet and lifestyle modifications for additional support.

When I hear a professional tell me that there’s a way to recover from Autism and all neurodiverse differences, it’s no different than telling me they can fix my Asianess and turn me into another race. It is a strong statement but being neurodivergent is the same as my skin, as part of my identity.

It’s never easy to bring new chairs to an old table. It’s also difficult to create a new table that tries to invite the old table to join. And I’m here to challenge both sides to see things from a Functional lens in order to help provide supportive care.

Nicole: My husband is one of my success stories!

As I noted, he was diagnosed with ADHD with High Intelligent Potential as an adult. When he was a kid, he often got blamed for being lazy. He slept through classes but could get straight A’s in all exams. Due to forgetfulness, inability to sleep at night, sleeping through the day, and being overweight, he was perceived as a useless person who got in the way most of the time.

His path was rough, and he had to quit high school and join the workforce. Even though he was accepted to UC Berkeley later on, the lack of income and his monkey-mind were still issues for him.

His internal noise was creating a negative feedback loop. He later became my client, and we have worked on his embodiment with the mind, food, and environment and within the first 22

months of our work together, he lost 180 pounds. He no longer needs to increase his ADHD meds as he did previously and can handle himself very well when he forgets to take meds. He can reconnect to his essence, turning his ADHD into a superpower. He can make decisions on different choices in life using his own judgments without impulsivity.

Over the timespan of 3-4 years, he’s earned three promotions and pay raises at work. But, the best part is that he embodies himself and is now able to show up to the world in his own way while also benefiting his employer. This has been inspiring for his colleagues and their families, who have started coming to me for advice on helping their kids.

And of course, our son has also made a huge improvement in his ability to make eye contact and communicate. He can make friends while being proud of himself as an official disabled and Autistic advocate who’s able to build so many awesome things to share with the world.

Sometimes instead of fixing, it’s best to start caring for people and meet them where they’re at.

The Power of Story