The Chemistry of Coffee 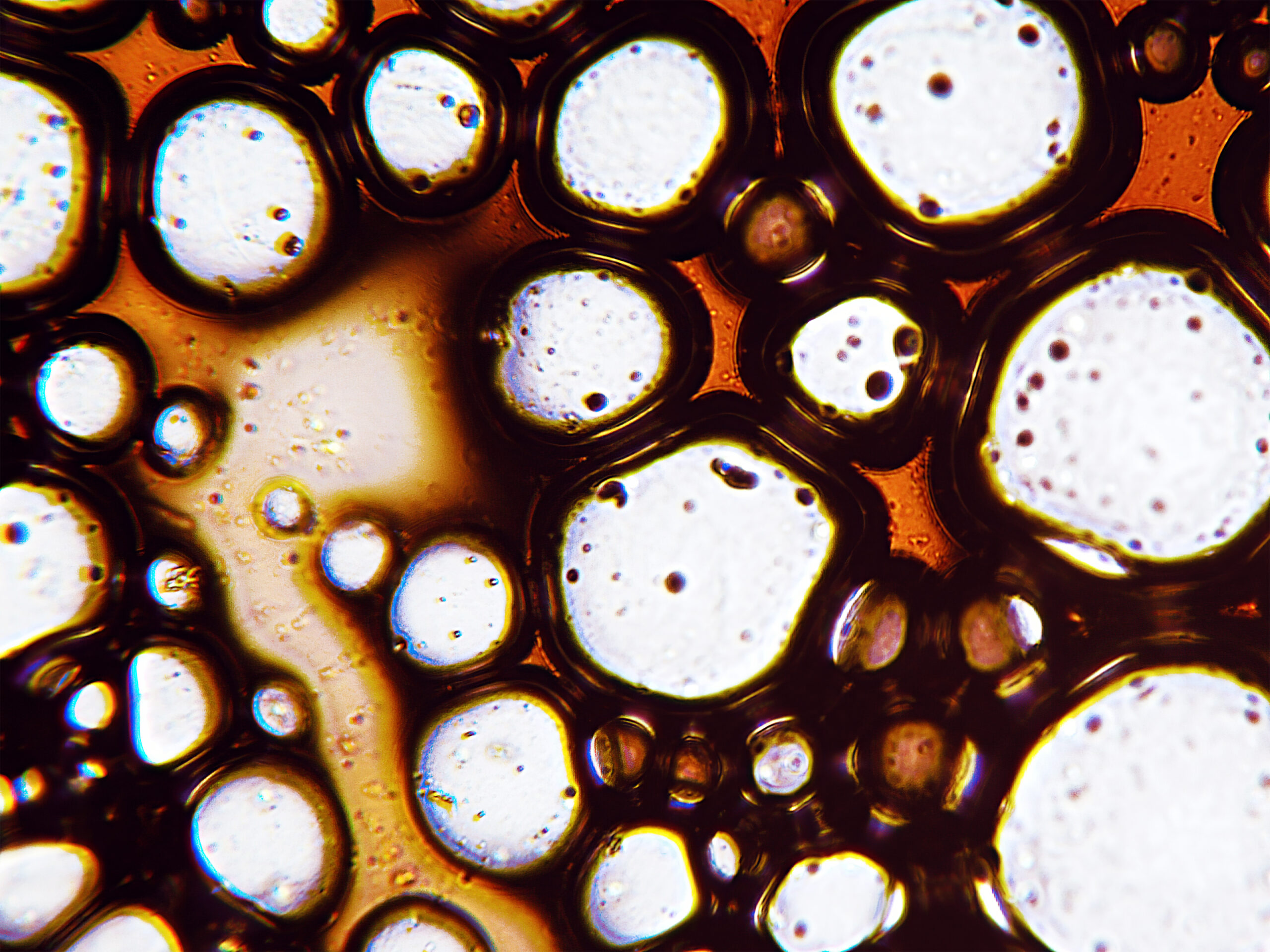 Although caffeine is found in over 100 plants worldwide, its effects are most potent in coffee. This potency stems from coffee’s high concentration of two other stimulants–theophylline and theobromine. Like caffeine, these two other stimulants are classified as alkaloid compounds that naturally occur in both plants and animals.

Coffee is primarily consumed for its mood elevating and stimulating effects, which occur about 30 minutes after ingestion. Those energizing results are due to its ability to increase both dopamine and adrenaline in the central nervous system.

Dopamine is a short-firing chemical, and it’s stoked by pursuit and desire. That means that dopamine is the brain chemical that will take you on the hunt. And dopamine creates excitement and the sensation of a thrill as you embark on the chase–whether for your next romantic partner, the job of your dreams, a cupcake, or that afternoon cup of coffee.

Adrenaline is also associated with drive and motivation. Adrenaline is one of our “fight or flight,” or immediate response, hormones. In an emergency, adrenaline increases your blood pressure, respiratory rate, heart rate, and general level of alertness and anxiety. It also redirects blood from your essential organs to your limbs so you can run or fight. This can disrupt the body’s ability to perform normal and parasympathetic functions such as digestion, absorption, detoxification, elimination and reproduction.

The release of these two brain chemicals after a good ol’ caffeine jolt helps you feel more alert and ready to tackle whatever is ahead of you in your day. But that doesn’t come without a price. The increase in dopamine and adrenaline is achieved by blocking another brain chemical: adenosine. One of adenosine’s natural functions is to thwart the release of dopamine, but that’s not all it does…

Typically, our production of adenosine increases with each hour we are awake. The chemical is responsible for energy transfer at a cellular level (think ATP and ADP), modulating internal inflammation (which we’ll come back to later), as well as coronary vasodilation. Adenosine is also an inhibitory neurotransmitter. In this way it suppresses the production of dopamine throughout the day and plays a role in promoting sleep. Coffee decreases the production of this nucleoside, affecting many biochemical processes as a result.

In short, caffeine keeps you awake and adenosine makes you sleepy.

We’re going to explore some of the challenges that coffee may pose on the body beyond the suppression of adenosine production, but please don’t throw your hot morning brew at me! Truth be told, I’m not one to refuse an organic decoction on occasion. And coffee has, no doubt, been associated with some positive health benefits due to its antioxidants and nutrient make-up.

That said, I do find it helpful to understand some of the risk and reward of any one food. This helps us get out of the mindset of anything being a “good” or “bad” food and brings us into the importance of bio-individuality. Plus it helps us to better explain to clients—based on their healing needs, goals, and genetic and physiologic make-up—why we may need to make a diet or lifestyle change to best support them.

The Downside of Drinking Coffee – Many Branches, Just 3 Roots

Having more energy and motivation might sound like a good thing. And perhaps it is in the short term. But how is that habitual cup of Joe actually thwarting get up and go? On a basic level, one problem is that caffeine and coffee can be addictive. Consuming just a small amount of coffee regularly (less than one cup) can lead to symptoms of withdrawal for some individuals when removed. Have you ever experienced this? I know I have! And I’ve seen many clients suffering fatigue and headaches as they try to “quit the coffee habit”.

Beyond addictive patterning, coffee has other effects on the body worth considering:

At the Functional Nutrition Alliance, we always look at chronic health issues through a “3 Roots, Many Branches” lens. Those three roots are the genes (or genetic predisposition), digestion, and inflammation. That’s why we’re going to view coffee through the perspective of these three roots, though as you can see above, there are many branches (i.e., signs and symptoms) that can be linked to coffee consumption.

For some of your clients, and maybe even you, coffee is never the best fuel for the day. In fact, for those that cannot process caffeine well, even the smallest amount will result in feelings of anxiety, jitters, and a sleepless night. And these individuals usually know it! Coffee, green tea, or even hot cocoa will be a big “no, thank you” for these people.

Caffeine metabolism has been found to be linked to two genes and their variants–the CYP1A2 gene which produces a liver enzyme that breaks down caffeine and the AHR gene which can determine how much of that enzyme your body makes.

Coffee’s Effect on the Gut

Interestingly, the study of effects of coffee on the gastrointestinal system have dated back to the end of the 9th century, where it was linked to the onset of certain digestive disorders. The overwhelming research on the subject reveals two things:

There is further conflict and controversy around whether and to what extent coffee consumption takes a toll on the esophageal sphincter, stomach acid and intestinal permeability. Yet one thing that’s not questioned is coffee’s role as a laxative. It acts as a laxative by causing the gastrointestinal muscles to contract.

It should also be noted that, like sugar, coffee can also rob the body of essential nutrients. These include calcium and the essential B vitamins that support our brain and detoxification health.

Finally, the auxiliary digestive organ, the liver, plays the most prominent role in the metabolism of caffeine. Coffee consumption increases liver activity and can place additional stress on this already taxed and hard-working powerhouse. In addition to caffeine, coffee can contain a wide constellation of toxic chemicals, depending on where it originates and how it was processed, that can add insult to liver injury.

Research suggests that, along with psychoactive effects, caffeine impacts the innate functioning of our endocrine, cardiovascular, respiratory, renal and gastrointestinal systems. More recently, studies are also weighing the impact of caffeine on the immune system.

Remember how I mentioned that adenosine has a role in modulating inflammation? Well it also has a part in signal transduction, the cellular process by which a molecule outside the cell signals a molecule on the cell surface to alter the environment within the cell. One of these signal transductions is cyclic adenosine monophosphate or cAMP. cAMP is a potent immunomodulator, suppressing inflammation and potentially wreaking havoc within the body.

As caffeine antagonizes the adenosine receptors, it suppresses the expression of the immune cells and can promote systemic inflammation. This occurs even while providing a short-term energy boost.

In addition, energy fueled by adrenaline could, over time, damage the immune system. The adrenal glands, which produce adrenaline, are at the pulse of the body’s hormonal stress response. These glands produce both adrenaline and cortisol, your two major fight-or-flight hormones. And that stress response, when repeatedly triggered, is a main precursor to an overactive immune system–a system that attacks itself–as seen in autoimmune conditions.

The constant stress on the adrenal glands and the continual release of the fight-or-flight hormones prompted by habitual caffeine consumption are one cause for the body to lose its immune tolerance. You’re not the only one who gets eager and enthusiastic. Your immune system gets hyper, too!

When addressing the three roots (genes, digestion and inflammation), we always aim to clear the diet, lifestyle and body of any potentially inflammatory agents. We also look to calm the entire system. This means it might be time for a coffee “detox.”

If you have clients who are working to cut back on caffeine or need to eliminate coffee as part of your upstream exploration of their health issues, here’s a free download with tips on removing it from their morning routine. I hope you’ll find this guide helpful in your practice! 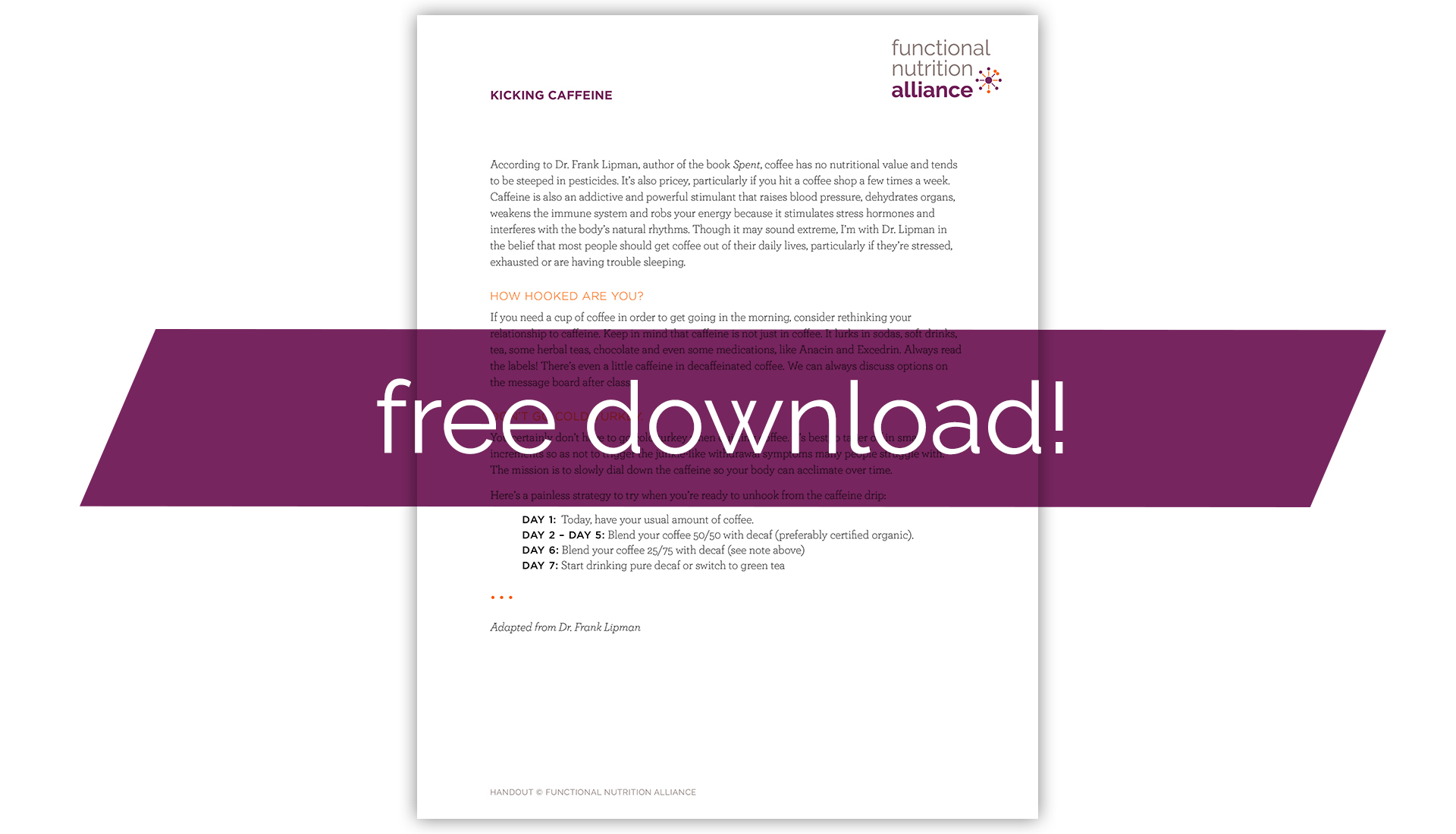 Institute of Medicine (US) Committee on Military Nutrition Research. Caffeine for the Sustainment of Mental Task Performance: Formulations for Military Operations. Washington (DC): National Academies Press (US); 2001. 2, Pharmacology of Caffeine. Available from: https://www.ncbi.nlm.nih.gov/books/NBK223808/

Crohn’s Through a Functional Lens

Crohn’s Disease is classified as autoimmune. As you know, autoimmunity is a condition in which the body produces an immune response against its own tissue constituents. Before we talk more about Crohn’s, let’s put autoimmunity into a bit more context so you and I can both grasp how profoundly this is impacting not just our […]

In a recent discussion with some Full Body Systems graduates, I asked them to describe what nutrition means to them. Some answers identified the bioindividual approach to care that I teach in Full Body Systems—to go slow and meet patients where they are with their needs for dietary change. And some others discussed nutrients directly—like […]

How to Discuss Essential Fats

When it comes to nutrition, we know that one size does not fit all. Your keto diet may wreak havoc on your partner’s body, and their vegan diet may lead to depletions for their sister. It’s just the truth about nutrition… different bodies have different needs for myriad reasons.  But what about food itself?  Are […]

Not too long ago, in the mid-20th century, doctors began to describe a stereotypical patient who came to them with chronic digestive issues—they were anxious, often female, and “neurotic.”  According to Maya Dussenberry, and the research done for her book “Doing Harm” (one of my favorites), the “stereotype that women’s symptoms are likely to be […]